Home » Resources » articles » Pharmacy » Is Amazon getting into the pharmacy business? This is what you need to know

Is Amazon getting into the pharmacy business? This is what you need to know 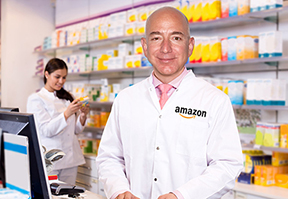 A report earlier this year that the massive online retailer was mulling a pharmaceutical-industry entry has had observers all aflutter. Amazon’s nearly $14 billion acquisition of Whole Foods, announced in June and closed just over two months later, sparked speculation that the grocery chain might soon house pharmacy locations.

Though Amazon itself has not confirmed a potential expansion into pharmaceuticals, the possibility has sent stocks of pharmaceutical middlemen south on more than one occasion.

“Amazon has shown that they have mastery of the technology and innovative approaches to really transform how the marketplace delivers product,” said Linda Pissott Reig, who co-chairs the FDA section of the Pittsburgh-based law firm Buchanan, Ingersoll & Rooney PC.

The move could also have wider implications for consumers. Amazon could use de-identified big data to then see if, for example, “a patient with depression is also seeking out self-help books, or particular products,” she said. “Amazon, with a giant marketplace, has a lot of ability to collect information.”

Why the prospect of Amazon’s entry to this new market is important: After transforming such industries as publishing, consumer electronics and cloud services — and decimating key players along the way — Amazon has built a reputation for dominance.

But part of the wide interest in an Amazon pharmacy is that the highly regulated drug business has never been particularly transparent. At best, U.S. drug pricing is complex; at worst, it’s dysfunctional.

Those who are skeptical of Amazon’s potential pharmacy entry have noted Amazon’s difficulty breaking into highly regulated markets, including alcohol distribution in the U.S.

Industry leaders have brought up similar points. For one, CVS Health Corp. Chief Executive Larry Merlo told Wall Street analysts in August that his industry was “highly regulated, so the barriers to entry are high.”

CNBC, which first reported on Amazon’s pharmacy plans in May, reported Friday that Amazon would make a decision before Thanksgiving. Given that time table, expect the question to crop up again this earnings season.

What companies could be affected: Though Amazon’s involvement could presumably affect any and all parts of the pharmaceutical supply chain, including drug makers, it’s most threatening to retail pharmacy chains like Walgreens Boots Alliance, CVS and Wal-Mart Stores Inc., according to Leerink Partners analyst Ana Gupte.

That’s because Amazon is expected to begin getting cash-pay and mail-order customers, eventually moving into the pharmacy-benefits manager and retail pharmacy business, Gupte said.

CVS, though, might be able to leverage its pharmacy-benefit manager unit to reduce its risk, said Leerink Partners analyst David Larsen.

Middlemen called pharmacy-benefit managers (PBMs), which work with drug makers to negotiate prices on behalf of health insurers and employers, are another player expected to be affected.

They are not a well-known part of the U.S. pharmaceutical system but have come under scrutiny in the last year amid public outrage over drug costs. Because PBMs negotiate discounts from drugs’ total cost, critics charge that they also push prices higher to make their discounts appear more favorable.

Amazon poses “both an opportunity and a threat” for Express Scripts Holding Company, the largest stand-alone PBM, Gupte said. Express Scripts announced on Tuesday that it will buy privately-held medical benefit management company eviCore healthcare for $3.6 billion, a move that some saw as a response to the Amazon threat.

Meanwhile, PBMs that are part of UnitedHealth Group and Humana Inc. will be more shielded, Gupte said.

Drug distributors such as McKesson Corp., AmerisourceBergen Corp. and Cardinal Health Inc. will likely have less exposure in the near term, according to Leerink’s Larsen.

Reasons for skepticism: A recent report that Amazon had obtained approval to become a wholesale distributors in several states sent pharmaceutical supply chain stocks down again in late October.

But scrutiny of those approvals by the investment firm Jefferies found something important: Correspondence between two state pharmacy boards and Amazon showed that those state licenses could only be used for medical device and supplies distribution.

That doesn’t rule out a pharmaceutical entry, but it does suggest that Amazon is starting with other, potentially easier medical products.

Mizuho analyst Ann Hynes is another skeptic. Before acquiring Whole Foods this year, Amazon had talked about entering the grocery industry for more than a decade, Hynes noted.

By contrast, Amazon hasn’t mentioned pharmacy on its earnings call in the past decade, Hynes said. In addition, even after CNBC reported on the online retailer’s purported plan, the company did not list any pharmacy-related jobs, Hynes said.

And, if the company did decide to move into pharmacy, “there is no obvious asset to buy,” Hynes said.

Amazon would need to either build or buy pharmacy capabilities, Gupte said, and could target a smaller player like specialty pharmacy Avella or acquire a larger entity.

Many companies might also want to partner with Amazon, Leerink’s Gupte said, including the Blue Cross Blue Shield PBM unit Prime Therapeutics, “to enhance its drug discounts and mail penetration.” So might Express Scripts and Walgreens, Larsen said.